It is highly likely that in his previous job as vice-president of finance at private aviation company Sentient Jet, John Cappadona was never asked whether he got to fly one of the company’s aeroplanes, or what the private jet experience was like, or how a passion for aviation could add fulfilment to his executive role. But as chief financial officer of School of Rock, things are different.

Being a drummer who is also a massive fan of Bruce Springsteen is very relevant as Cappadona’s passion for music clearly contributes to his role of keeping his organisation singing from the same song sheet financially – and the appropriate financial IT systems play a huge part in this.

Founded in 1998 as a single school in Philadelphia in the US, School of Rock describes itself as the world’s largest and most trusted multi-location music school, with tens of thousands of musicians going through its classes, workshops camps and performance programmes every day. The concept from day one was to teach kids music through songs.

The organisation caters to every experience level, from complete novice to seasoned player. Students tackle new and unique challenges to not only learn to be great musicians, but are also taught in a band setting to learn valuable, lifelong lessons in work ethic and teamwork.

The company maps over 1,200 songs and has parts mapped out for each of them at varying levels. Cappadona says this means you could have a child sit down, and after the first couple of lessons, they are playing an AC/DC song. This process is intended to build confidence and make sure students stay on their courses.

As of September 2022, the company was present in 315 locations in 15 countries – all but 47 of them franchised – with the stated mission of “helping aspiring musicians master skills, unleash creativity, and develop tools they need to thrive in life”.

The company says its leadership team members combine business savviness, a passion for music and a drive to help children succeed. For Cappadona, this means overseeing the organisation’s financial activities, directing the preparation of current financial reports and summaries, and creating forecasts of future growth.

But working for School of Rock, things are a bit different from normal, says Cappadona. It is a labour of love and the company is keen to see just who will go the extra mile. “It’s an absolute passion of our franchisees,” he says. “Yes, they are capitalists and. they want to make money, but it’s also just the way the schools ingrain themselves within the community.

“When we do our discovery day for prospective franchisees, my CEO will end the meeting giving them a list of reasons why they should not do a school franchise – and one of them is: ‘If you don’t like kids, this is probably not for you.’ But the other thing is, we’re not Dunkin Donuts, we’re not McDonald’s. You truly have to have a passion for this. There’s a lot of legwork to get it going, but once it does, it’s just so rewarding. That’s the feedback.”

But just like Dunkin Donuts and McDonald’s, School of Rock is still a business – a business with those 300-plus locations that creates a complexity that needs to be managed professionally and socially as the company grows. There’s that word: growth. Most conversations with business leaders will almost invariably arrive at growth or a similar business metric sooner or later, and it has been no different for School of Rock under Cappadona’s tenure, during which it has grown from 22,000 students at the end of 2017 to 56,000 now. 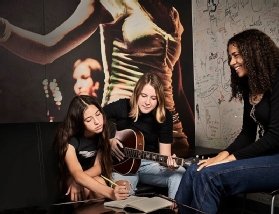 In terms of management, that means 56,000 different people’s invoices from 15 different countries. But there was another specific management challenge when Cappadona walked through the door – there were only 20 company-owned schools and he had work to do as the company ended up buying back 27 franchises, and all of their associated accounting practices, driving a need to invest in accounting technology.

“We do all the accounting and everything for all of those locations,” he says. “Franchisees handle their own books – they do everything. So, in my team when I came in, we had three accountants and we’ve still got three accountants. We actually went up to four accountants – we just lost one – but made additional investments in NetSuite.”

School of Rock has been a NetSuite customer for 10 years. Before Cappadona joined, the idea was to use the technology at all the franchisees, so everyone was behind one system. The problem was that such an approach was overkill for a franchisee, says Cappadona. “The one limitation is that if you think about our business model, it’s much like a gym membership – you come in, you sign up,” he says. “Give us your credit card, and you get a one-on-one lesson weekly plus a crew performance, and we bill you monthly.

“So, the real challenge was in the schedule, scheduling the teacher with the student. NetSuite wasn’t very good at doing that – that’s not what it was meant to do. So we had a lot of people using Google calendars to try to do that. And in 2014, we actually made the decision to change our point of sale somewhere else, and now we use NetSuite corporately to do that.”

Another issue that Cappadona faced on arrival was that a lot of the company’s processes were manual, even though it had NetSuite, and it was sometimes taking up 20 days to close the books. He told the company CEO that clearly this was going to change.

“We started slowly but surely, just getting more things into NetSuite, really utilising the uploading capability,” he says. “So, if we’re doing journal entries and that stuff, we do it all on Excel and do a CSV file upload that automates some of our inter-company processes. This year, we’ve implemented advanced revenue management to help us with [revenue recognition standard] ASC 606. We are also doing a gig with ACS to help us streamline more process.”

Yet as it does this, the surprising thing is that Cappadona and his team have not had any formal training on NetSuite. He believes that if you’ve used a general ledger system before, you can understand the look and feel of the software. Ongoing, the use of the software is considered fine.

Yet despite this laid-back approach, there is a laser focus on the return on investment from using the software. Because the NetSuite system has been in use for 10 years, Cappadona concedes that it would be complicated to calculate a definite payback value, but he stresses that given what the company is now doing now with NetSuite, the real proof of the system will arrive at the end of the year.

“We have put our revenue management within the system and we’ll be saving a lot of time and audit fees, because just going through that whole process with the auditors was a nightmare. But again, we’ve reduced our close from 20 days to nine, and I’m paying about $10,000 a month for my staff. And then my staff is actually able to do other things besides doing the close. Right there, within a year, there’s payback on the investment I made on ACS, that’s for sure.

“Right now, we are using the [NetSuite] fixed asset management module for all of our fixed assets. We are actually building a large portfolio of intangible assets right now – patents, trademarks and things like that. We are going to load all of that into NetSuite, because right now I’ve got a massive spreadsheet that’s dragging that I have to give to the auditors and, we went to ACS and we’re like, ‘Hey, do you think we could do it?’ They’re like, ‘Yeah, you just map it to a different account do this…it’s all there.’

“I want to get the close down to seven days, and I don’t want to replace this accountant, so if I do that, that’s going to save me at least $100,000 ahead. And then whatever time I get back. For us, it’s really about saving time and it’s also about if you’re on a perpetual close, you’re going to lose people. Just nobody wants to do that. It’s blocking and tackling.

“Because we had NetSuite, we went from 20 to 47 schools. If we were running this on QuickBooks, that way we would have died. I mean, it was so easy to literally bring in some of these other schools just like that. We replicated it. We already had the charter accounts, we had things all set up and just set up the new location.”

Cappadona expects the company to ramp up usage of NetSuite over the coming months, with the company keen to learn more about accounts payable automation, which is regarded as very much a pain point currently, mainly because of another legacy software in use. In fact, Cappadona calls it the biggest pain point he has right now as he and his team have issues in pushing invoices from that system into NetSuite.

Surprisingly, given his passion for the company and music in general, Cappadona has never taken one of the school’s lessons. “I have not – and that’s a sin,” he says. “I keep saying that I’m going to do it.”

But maybe not anytime soon. As a drummer, he will understand the many parts that make up his business kit, and the need to stay in time and hit the right financial beat with the software at his disposal.